Furty has been playing Path of Exile since the release of the Onslaught League in 2013, and has a deep and diverse well of experience within the game. Equally comfortable playing on Hardcore, Softcore, and Solo-Self Found Leagues, recent ladder results include finishing Delirium League at Rank 61 playing his Kinetic Blast & Power Siphon Pathfinder Build, Rank 5 on the Legion SSF League playing his Essence Drain & Contagion Trickster Build, and the Betrayal League at Rank 186 playing his Elemental Hit Ascendant Build. You can follow him on Twitter, or check out his occasional streams on Twitch.

This build guide is split over multiple pages, both to prevent it from getting too long, as well as to help you better find the information you are looking for. In addition to the current page, which presents general information about the build and also contains a Leveling and FAQ section, we have the following pages:

Cyclone received several buffs in Legion 3.7, and has once again reasserted itself as one of the staple skills in the melee metascape. Slayer also received a few redesigned keystones, and is now one of the perfect pairings for crit-based melee builds. Despite a few tweaks in Blight 3.8,

Cyclone remains — not only viable — one of the most potent melee end-game builds available.

The result is a

Cyclone build of monstrous proportions. With the ability to melt any content in a matter of moments, our Crit-Based Cyclone Slayer is doubtless one of the strongest overall melee builds to ever grace Path of Exile.

No content is out of reach for this build. With 9000 or more effective Life, increased maximum Resistances, tons of Armour, and more, this build is not lacking in defense. Couple that with up to 10 Million DPS in the recommended gear and vastly increased AoE, this

Cycloner is ready to party.

It is always a great time to play

Cyclone, and this is the most overpowered way to do it. Our Crit-Based Cyclone Slayer is a truly unstoppable force that is the perfect candidate to fulfill any task.

In Patch 3.9.0 the Crafting changes have significantly hurt the accessibility of the build if you are using a crafted Rare instead of

Starforge. While numbers in excess of 15 million DPS are possible using

Abyssus on bosses, this takes more expensive gear than before and is not really a realistic endpoint for clearing DPS. In most cases, a well geared player using

Make sure you are using the Path of Building Community Fork to include Impale DPS in the calculations. Alternatively, you can multiply DPS by 2.04 (just over doubling our DPS) as our Impale effect and chance affords us 104% more damage.

This is my current character and still in the process of being built up. Toggle

Abyssus for _Sirus_/boss numbers as

Devoto's Devotion is not necessary for that fight.

Cyclone can be a polarizing skill — careful movement is necessary for dangerous enemies
– Expensive to achieve top-end gear, depending on the popularity and availability of items (e.g.

Cyclone is a very simple and straightforward skill. Now a channeled ability, your character spins around and attacks extremely quickly — technically it is considered a movement skill, although it slows your character. By stacking a lot of damage, Critical Strike Chance and Multiplier, Attack Speed, Impale, and Movement Speed, our Cyclone Slayer glides effortlessly through maps while shredding packs and bosses alike.

This is an exclusively Physical damage build, which makes it relatively easy to itemize for early on. As you start to become more ambitious with armour acquisitions, gear can become a little more difficult and/or expensive to obtain — after all, crit items are highly sought after for many builds. Fortunately, many of the items can be crafted yourself, and for only a few

Exalted Orbs you outfit yourself with extremely strong items.

Leap Slam into a pack, and

Cyclone through it to blow it to pieces. The new Overwhelm and Impact Ascendancy keystones have ideal synergy with a crit

Forge of the Phoenix Map with Kosis and Omniphobia

This is our recommended Level 100 Passive Skill Tree.

For more details on the Passive Tree, skill acquisition order, and more, be sure to check out the Passive Skill Tree page for in-depth information.

We go over all of the gem links this build uses in the end-game on our Gem Link page.

Our Ascendancy, Bandit, and Pantheon Power page goes into detail about all the choices you need to make in these regards.

These items strike a balance between power and cost-effectiveness. If you want to explore more options for Gear (both budget and high-end), Flasks, or get more information on alternatives and specialty items, please ensure you read the Gear, Jewels, and Flasks section in its entirety.

Some example gear used by our character: 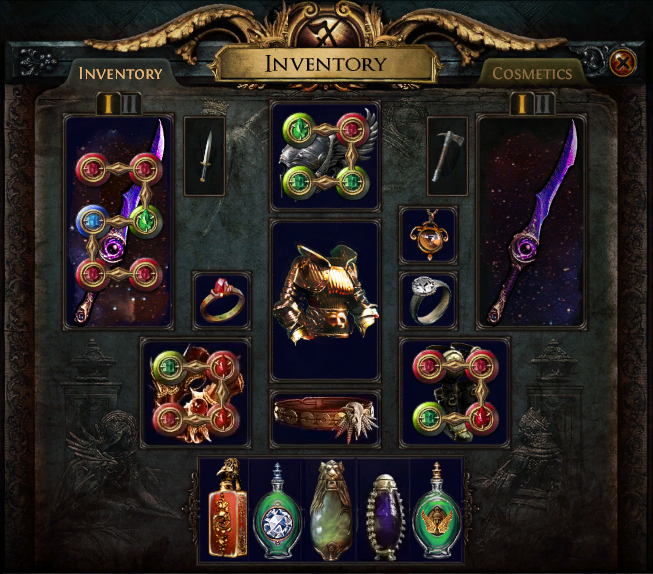 For much more detailed information on the best gear, jewels, and flasks to use, be sure to examine our detailed Gear Breakdown page.

As a reminder, we have several guides to help you level up a character.

Ground Slam, which you should use until Level 12, when

Sunder can be acquired. Sunder is a fairly potent leveling skill due to its high base damage and ease of use. Your Sunder links, in order of priority, are:

Just use what you can get until the gems become available —

Ruthless Support are available very early, along with

Onslaught Support, but you will have to wait until Act II for

Added Fire Damage Support is an option in the meantime, if you are using a

Blood and Sand is available right at Level 4, and should be picked up immediately. Acquire

Herald of Ash and Herald of Purity in Act II to help you level up. You can get

Pride in Act III after doing Lost in Love and drop Herald of Purity.

Cyclone can honestly be used as soon as you can sustain it (e.g. using a ring such as

Thief's Torment, but we recommend waiting until the latter part of the leveling process, or even after finishing Kitava. If you are league starting, you will probably want to do a little mapping before making the full switch, as

Cyclone is a relatively weak skill until it gets a bit of scaling behind it.

Which Annointments are Best for my Amulet?

As with all annointment advice, you can make a variety of different choices depending on how you want to tailor your build. Consider these recommendations:

Why Do You Take Point Blank on the Tree?

Make sure you have the crafted affix -# to Total Mana Cost of Skills on both your rings. If you do not have those affixes, you will need to disable one of your auras and acquire % of Physical Attack Damage Leeched as Mana on one of your gear pieces (recommended: Gloves).

Atziri's Acuity. Should I take Vaal Pact on the Tree?

This is a complicated question, because it largely depends on you, your gear, what league you are playing on, and your priorities as a player.

If you already have

Glorious Vanity and have specced into Corrupted Soul, we recommend pathing to Vaal pact (3 point investment). If you have not yet done this, the answer is a lot murkier, as it is a 5 point investment from Golem’s Blood, and you will have to decide for yourself.

Check out the rest of the guide for any additional information:

Table of contents
Navigate Between all the Guide's Pages